Available on all platforms

Projection is a way of representing a three-dimensional object in a two-dimensional space, like a cube projected onto a computer screen. Perspective projection uses a viewing frustum (a rectangular pyramid) to model and project a three-dimensional world and its objects on the screen. The viewing frustum becomes increasingly wider as it moves further from the origin of the viewpoint. The origin of the viewpoint could be a camera or the eyes of an observer facing the screen. The projected perspective produces the illusion of three dimensions with depth and distance, where the objects closer to the screen appear larger than the objects farther from the screen. 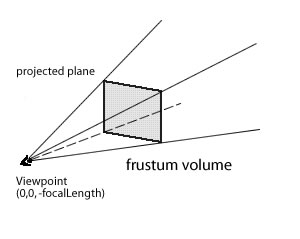 A default PerspectiveProjection object is a framework defined for perspective transformation of the root object, based on the field of view and aspect ratio (dimensions) of the stage. The projection center, the vanishing point, is set to the center of the stage, which means the three-dimensional display objects disappear toward the center of the stage as they move back in the z axis. The default viewpoint is at point (0,0) looking down the positive z axis. The y-axis points down toward the bottom of the screen. You can gain access to the root display object's perspective projection settings and change the field of view and projection center properties of the perspectiveProjection property through the root object's DisplayObject.transform property.

Creates an instance of a PerspectiveProjection object.

Specifies an angle, as a degree between 0 and 180, for the field of view in three dimensions. This value determines how strong the perspective transformation and distortion apply to a three-dimensional display object with a non-zero z-coordinate.

A degree close to 0 means that the screen's two-dimensional x- and y-coordinates are roughly the same as the three-dimensional x-, y-, and z-coordinates with little or no distortion. In other words, for a small angle, a display object moving down the z axis appears to stay near the same size and moves little.

The distance between the eye or the viewpoint's origin (0,0,0) and the display object located in the z axis. During the perspective transformation, the focalLength is calculated dynamically using the angle of the field of view and the stage's aspect ratio (stage width divided by stage height).

A two-dimensional point representing the center of the projection, the vanishing point for the display object.

The projectionCenter property is an offset to the default registration point that is the upper left of the stage, point (0,0). The default projection transformation center is in the middle of the stage, which means the three-dimensional display objects disappear toward the center of the stage as they move backwards in the z axis.

Returns the underlying Matrix3D object of the display object.