Available on all platforms

The Security class lets you specify how content in different domains can communicate with each other.

The file is a local file and has been trusted by the user, using either the Flash Player Settings Manager or a FlashPlayerTrust configuration file. The file can read from local data sources and communicate with the Internet.

The file is a local file, has not been trusted by the user, and it is not a SWF file that was published with a networking designation. In Adobe AIR, the local file is not in the application resource directory; such files are put in the application security sandbox. The file may read from local data sources but may not communicate with the Internet.

The file is a local file, has not been trusted by the user, and it is a SWF file that was published with a networking designation. The file can communicate with the Internet but cannot read from local data sources.

The file is from an Internet URL and operates under domain-based sandbox rules.

Indicates the type of security sandbox in which the calling file is operating. Security.sandboxType has one of the following values:

If two SWF files are served from the same domain נfor example, http://mysite.com/swfA.swf and http://mysite.com/swfB.swf נthen swfA.swf can examine and modify variables, objects, properties, methods, and so on in swfB.swf, and swfB.swf can do the same for swfA.swf. This is called cross-movie scripting or cross-scripting.

If two SWF files are served from different domains נfor example, http://siteA.com/swfA.swf and http://siteB.com/siteB.swf נthen, by default, Flash Player does not allow swfA.swf to script swfB.swf, nor swfB.swf to script swfA.swf. A SWF file gives permission to SWF files from other domains by calling Security.allowDomain(). This is called cross-domain scripting. By calling Security.allowDomain("siteA.com"), siteB.swf gives siteA.swf permission to script it. 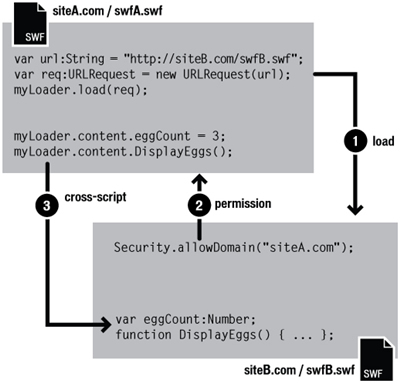 In addition to protecting SWF files from cross-domain scripting originated by other SWF files, Flash Player protects SWF files from cross-domain scripting originated by HTML files. HTML-to-SWF scripting can occur with older browser functions such as SetVariable or callbacks established through ExternalInterface.addCallback(). When HTML-to-SWF scripting crosses domains, the SWF file being accessed must call allowDomain(), just as when the accessing party is a SWF file, or the operation will fail.

The version column in the previous table shows the latest SWF version involved in a cross-scripting operation. Flash Player determines its behavior according to either the accessing SWF file's version or the version of the SWF file that is being accessed, whichever is later.

Version 5. There are no cross-domain scripting restrictions.

Version 6. Cross-domain scripting security is introduced. By default, Flash Player forbids cross-domain scripting; Security.allowDomain() can permit it. To determine whether two files are in the same domain, Flash Player uses each file's superdomain, which is the exact host name from the file's URL, minus the first segment, down to a minimum of two segments. For example, the superdomain of www.mysite.com is mysite.com. SWF files from www.mysite.com and store.mysite.com to script each other without a call to Security.allowDomain().

Version 7. Superdomain matching is changed to exact domain matching. Two files are permitted to script each other only if the host names in their URLs are identical; otherwise, a call to Security.allowDomain() is required. By default, files loaded from non-HTTPS URLs are no longer permitted to script files loaded from HTTPS URLs, even if the files are loaded from exactly the same domain. This restriction helps protect HTTPS files, because a non-HTTPS file is vulnerable to modification during download, and a maliciously modified non-HTTPS file could corrupt an HTTPS file, which is otherwise immune to such tampering. Security.allowInsecureDomain() is introduced to allow HTTPS SWF files that are being accessed to voluntarily disable this restriction, but the use of Security.allowInsecureDomain() is discouraged.

Version 8. There are two major areas of change:

Occasionally, you may encounter the following situation: You load a child SWF file from a different domain and want to allow the child SWF file to script the parent SWF file, but you don't know the final domain of the child SWF file. This can happen, for example, when you use load-balancing redirects or third-party servers.

In this situation, you can use the url property of the URLRequest object that you pass to Loader.load(). For example, if you load a child SWF file into a parent SWF, you can access the contentLoaderInfo property of the Loader object for the parent SWF:

Make sure that you wait until the child SWF file begins loading to get the correct value of the url property. To determine when the child SWF has begun loading, use the progress event.

The opposite situation can also occur; that is, you might create a child SWF file that wants to allow its parent to script it, but doesn't know what the domain of its parent will be. In this situation, you can access the loaderInfo property of the display object that is the SWF's root object. In the child SWF, call Security.allowDomain( this.root.loaderInfo.loaderURL). You don't have to wait for the parent SWF file to load; the parent will already be loaded by the time the child loads.

If you are publishing for Flash Player 8 or later, you can also handle these situations by calling Security.allowDomain("*"). However, this can sometimes be a dangerous shortcut, because it allows the calling SWF file to be accessed by any other SWF file from any domain. It is usually safer to use the _url property.

Lets SWF files and HTML files in the identified domains access objects and variables in the calling SWF file, which is hosted by means of the HTTPS protocol. Flash Player provides allowInsecureDomain() to maximize flexibility, but calling this method is not recommended. Serving a file over HTTPS provides several protections for you and your users, and calling allowInsecureDomain weakens one of those protections.

This method works in the same way as Security.allowDomain(), but it also permits operations in which the accessing party is loaded with a non-HTTPS protocol, and the party being accessed is loaded with HTTPS. In Flash Player 7 and later, non-HTTPS files are not allowed to script HTTPS files. The allowInsecureDomain() method lifts this restriction when the HTTPS SWF file being accessed uses it.

Use allowInsecureDomain() only to enable scripting from non-HTTPS files to HTTPS files. Use it to enable scripting when the accessing non-HTTPS file and the HTTPS file being accessed are served from the same domain, for example, if a SWF file at http://mysite.com wants to script a SWF file at https://mysite.com. Do not use this method to enable scripting between non-HTTPS files, between HTTPS files, or from HTTPS files to non-HTTPS files. For those situations, use allowDomain() instead. The following scenario illustrates how allowInsecureDomain() can compromise security, if it is not used with careful consideration. Note that the following information is only one possible scenario, designed to help you understand allowInsecureDomain() through a real-world example of cross-scripting. It does not cover all issues with security architecture and should be used for background information only. The Flash Player Developer Center contains extensive information on Flash Player and security. For more information, see the Flash Player Developer Center Topic <a href="http://www.adobe.com/go/devnet_security_en" scope="external">Security.

Suppose you are building an e-commerce site that consists of two components: a catalog, which does not need to be secure, because it contains only public information; and a shopping cart/checkout component, which must be secure to protect users' financial and personal information. Suppose you are considering serving the catalog from http://mysite.com/catalog.swf and the cart from https://mysite.com/cart.swf. One requirement for your site is that a third party should not be able to steal your users' credit card numbers by taking advantage of a weakness in your security architecture.

Suppose that a middle-party attacker intervenes between your server and your users, attempting to steal the credit card numbers that your users enter into your shopping cart application. A middle party might, for example, be an unscrupulous ISP used by some of your users, or a malicious administrator at a user's workplace נanyone who has the ability to view or alter network packets transmitted over the public Internet between your users and your servers. This situation is not uncommon.

If cart.swf uses HTTPS to transmit credit card information to your servers, then the middle-party attacker can't directly steal this information from network packets, because the HTTPS transmission is encrypted. However, the attacker can use a different technique: altering the contents of one of your SWF files as it is delivered to the user, replacing your SWF file with an altered version that transmits the user's information to a different server, owned by the attacker.

The HTTPS protocol, among other things, prevents this "modification" attack from working, because, in addition to being encrypted, HTTPS transmissions are tamper-resistant. If a middle-party attacker alters a packet, the receiving side detects the alteration and discards the packet. So the attacker in this situation can't alter cart.swf, because it is delivered over HTTPS.

Obviously, this implementation is not desired, but you still want to allow cross-scripting between the two SWF files on your site. Here are two possible ways to redesign this hypothetical e-commerce site to avoid allowInsecureDomain():

Web browsers have enforced separation between HTTPS and non-HTTPS files for years, and the scenario described illustrates one good reason for this restriction. Flash Player gives you the ability to work around this security restriction when you absolutely must, but be sure to consider the consequences carefully before doing so.

Looks for a policy file at the location specified by the url parameter. Adobe AIR and Flash Player use policy files to determine whether to permit applications to load data from servers other than their own. Note that even though the method name is loadPolicyFile(), the file isn't actually loaded until a network request that requires a policy file is made. With Security.loadPolicyFile(), Flash Player or AIR can load policy files from arbitrary locations, as shown in the following example:

This causes Flash Player or AIR to attempt to retrieve a policy file from the specified URL. Any permissions granted by the policy file at that location will apply to all content at the same level or lower in the virtual directory hierarchy of the server.

For example, following the previous code, these lines do not throw an exception:

However, the following code does throw a security exception:

You cannot connect to commonly reserved ports. For a complete list of blocked ports, see "Restricting Networking APIs" in the ActionScript 3.0 Developer's Guide.

Using the xmlsocket protocol along with a specific port number lets you retrieve policy files directly from an XMLSocket server, as shown in the following example. Socket connections are not subject to the reserved port restriction described above.

You can prevent a SWF file from using this method by setting the allowNetworking parameter of the object and embed tags in the HTML page that contains the SWF content.